It’s already been a few days since the last post – so why not make little update, eh?

Today once again, I went for a little visit to the famous Akihabara. Even after so many years it’s still one of my favorite places in Tokyo. Anime and electronics everywhere! The main reason for today’s trip was to see weather or not the upcoming Xmas would already be visible – in the form of special figures and other seasonal products. It seems that I was a tad too early though, as even the Kentucky fried chicken statue hadn’t changed into a Santa-costume. As for the figures, I could only find Hatsune Miku with a Xmasy getup. Slowly but surely though the atmosphere is changing – people are already wearing winter jackets! 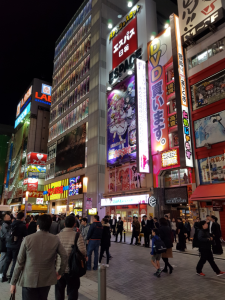 Now that I mentioned Kentucky Chicken… I’ve often heard rumors that in Japan it’s common to eat Kentucky chicken on Xmas, but whenever I ask about it from any of my Japanese friends, their reaction is like: “Kentucky chicken? Really? Here in Japan? But that’s expensive!”. So basically I’ve yet to get any concrete proof on weather the rumor is indeed true or not. BUT! The truth might still be somewhere out there. Instead of the Santa-costume I was expecting to see on the statue, I found this ad on the wall! Coincidence? I think not. Sooner or later I’m going to find out the truth… 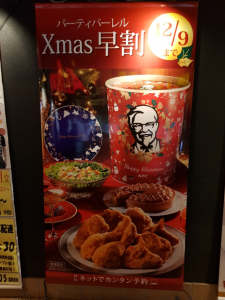 I also happened to stumble upon an interesting street gig in front of Yodobashi Camera. They played some kind of Jazz with a really good vibe to it! I’ll be uploading a video about it later on, but here’s a picture of them for starters! 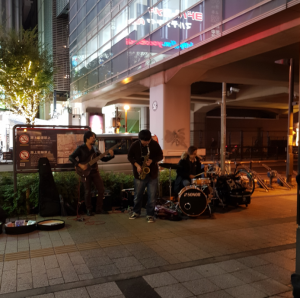 I left from AKIBA with a warm feeling in my chest (let’s hope it’s not a heart attack!).

On another note! The elves of Export Manga have been working 27/7 and there are many new products available on the Export Manga website, with plenty more to come! Stay tuned for more updates!